Right after MWLUG 2012 last year, my son volunteered me to participate with him on his Science Olympiad quest.  I figure it would not take too much time.  As a kid, I was involved with Science Fair competition for many years.  However, it seems things have changed.  I discovered that I was volunteered for the Mission Possible competition.  I was a bit surprised on the tasks that were required.  So over the next five months I had to build a Rube Goldberg machine that had 10 to 13 tasks.  In order to complete this machine, I would have had a machine shop at home.  Everyone has a machine shop don't they.  With no machine shop, I had to improvise with what tools I had.  Many many nights were spent in 20 degrees or less weather milling, sanding, cutting, and grinding wood and metal to make this machine.  Did I mentioned, that I do not have a heated garage nor is it attached.

So after many competitions and modifications we were successful in winning Gold in the Regional Competition.  I am very proud that he won four Gold Medals in every competition he participated.  Since my son was not a varsity member, Regionals was the end of this years competition.  His school however is going to the Nationals.  Unlike, our competitors whom had up to three electric motors to drive their machine, our machine relied only on potential and kinetic energy created by gravity. 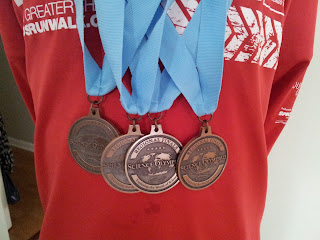 As of this weekend, the machine is no longer functional since I needed the ball bearing to fix my bike.

Here is a video of my five months of hard work.


And yes Gregg it was a Miller Genuine Draft Beer Can.
Posted by Domino Interface at 11:27 AM