The MWLUG 2013 online guaranteed discount of $139 for a double at the Crowne Plaza Hotel - Downtown will expire on August 1, 2013.  Afterwards, you will have to call and see if there is available rooms.  So make sure you book your room before August 1, 2013.  We are four weeks away from the start of MWLUG 2013 so make sure you register as soon as your can.  We will be announcing the Thursday Evening Event next week.

To register for MWLUG 2013, please go to our web site: http://www.mwlug.com/mwlug/mwlug2013.nsf/Register.xsp
Posted by Domino Interface at 12:31 PM No comments:

Announcing the MWLUG 2013 OGS Speaker, From the Indianapolis Colts ...

We are very please to announce the MWLUG 2013 Opening General Speaker will be former US Marine, Author, and Indianapolis Colts Community Spokeperson, Josh Bleill.   Josh the author of One Step at a Time: A Young Marine's Story of Courage, Hope, and a New Life in the NFL present about building a Community.

Along with Scott Souder our MWLUG 2013 IBM OGS speaker, Josh will deliver our Opening General Session. Special thanks to Sam Bridegroom one of our Indianapolis MWLUG team members for making this possible. 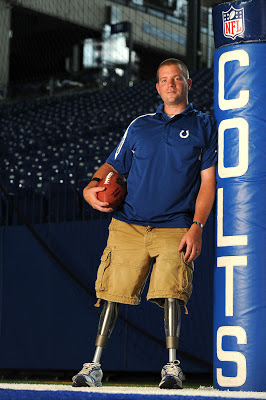 Marine Corporal Josh Bleill [Bly-ul; rhymes with “Kyle” or “smile”] is a native of Greenfield, Indiana. After graduating high school, Josh attended . Upon completion of his education, Josh decided to serve his country by joining the United States Marine Corps in 2004, and was activated for a tour of duty in Iraq in 2006.

While serving in , Corporal Bleill was severely injured, resulting in the loss of both of his legs.  After extensive rehabilitation, Bleill returned to in August of 2008, where he attacked his new life head-on.  This new life included employment as the Indianapolis Colts Community Spokesperson.

Indianapolis Colts Owner, Jim Irsay, has described Bleill as “very talented, bright-eyed, and skilled,” and Josh now travels the country to spread his message of hope, “one step at a time.”

Posted by Domino Interface at 7:39 AM No comments:

We are please to post the sessions for MWLUG 2013.  We will be adding a few more sessions to this list as we get everything together for this conference.  MWLUG 2013 will have over 40+ sessions and workshops with a $35.00 donation.  For a list of the current MWLUG 2013 sessions go to:

http://www.mwlug.com/mwlug/mwlug2013.nsf/Register.xsp
Posted by Domino Interface at 2:49 PM No comments: