Showing posts from June, 2018
Show all

June 25, 2018
We are pleased to announce the agenda for MWLUG/CollabSphere 2018 is now online. It is going to be one of the best conferences we will ever had. All great sessions from our entire community including IBM Customers, IBM Business Partners, and IBMers not just from ICS but from many other parts of IBM. This is collaboration at its finest. http://collabsphere.org MWLUG/CollabSphere 2018 consist of: 54 Business and Technical Sessions 7 Roundtables 6 Chat Sessions 3 Workshops Opening General Session Opening General Session - Domino Closing General Session So get registered,  http://collabsphere.org/ug/collabsphere2018.nsf/register.html
Post a Comment
Read more

Security and Compliance is NOT an Option! - MWLUG/CollabSphere 2018 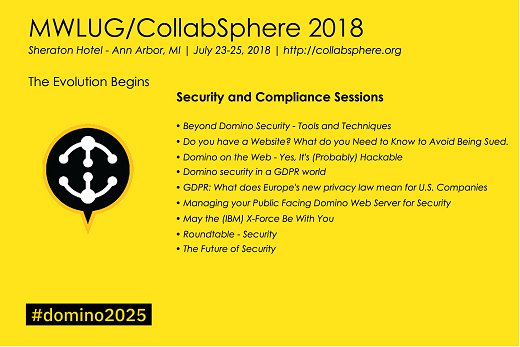 Time and time again developers create cool applications that users love.  Whether it is a web or mobile application their primary focus is on the UI and user interaction.  From the design and user-ability perspective that it is important.  However, majority of these applications are designed and built  without the consideration of data security or whether it compiles to government compliance and regulations.  Including security and following government dictated regulations seems to be an after thought.  Data security and compliance should not be an after thought, but part of your core design.  So as part of MWLUG/CollabSphere 2018, we have an entire track focused to Security and Compliance.   We hope to see everyone there at CollabSphere 2018 at the Sheraton Hotel in Ann Arbor, MI from July 23 to 25, 2018. To register go to  http://collabsphere.org/ug/collabsphere2018.nsf/register.html. Here is a list of Security and Compliance sessions at MWLUG/CollabSphere 2018
Post a Comment
Read more 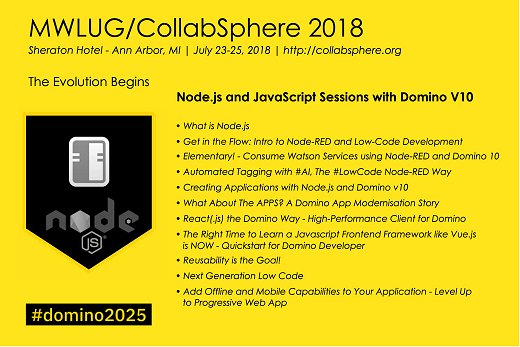 As I said in my previous blog, Node.js with Domino v10 brings significant opportunities to the ICS community whether you are an IBMers, IBM Customer, IBM Business Partner, ISV, developer or administrators. I have talked to a number of individuals and they feel there is a lot of potential for them.  IBM will be releasing two different betas.  The second beta will include the Node.js integration with Domino.  I wished it was included in the first beta. I would have love to test the Node integration earlier.  We have been waiting for the Node integration to extend the power of our iPhora platform. In preparation for the up and coming Node/Domino launch, we are providing an entire series of Node/Domino sessions and discussions at MWLUG/CollabSphere 2018 starting from the basics to the more advanced use of Node in Node-Red along with JavaScript sessions which will be critical for the development of applications with Node.js. We hope to see everyone there at CollabSphere 2018 at the Sh
Post a Comment
Read more

June 11, 2018
I am please to announce the CollabSphere 2018 sessions are now available on the CollaSphere web site at http://collabsphere.org/ug/collabsphere2018.nsf/sessions.html.   We have great speakers coming from all over the world including close to two dozen IBM Champions. With the renew focus on the Domino 10 family of products plus IBM Watson Workspace and IBM Connections, CollabSphere 2018 will be celebrating our tenth anniversary with one of the best lineup of sessions we have ever had. 53 Business and Technical Sessions 8 Roundtables 6 Chat Sessions 3 Workshops Opening General Session Opening General Session - Domino Closing General Session
Post a Comment
Read more

Do You Node Why it Matters? - The Importance of Domino 10 and Node

June 05, 2018
With IBM Domino v10 coming this fall, it brings one critical new feature to Domino, the integration of Node with Domino. IBM Domino v10 brings the most popular application development environment to the most secure application platform. Some are asking why does this matter. There are literally 10 tens of thousands of applications and NPM modules that have been developed  from of all sources, some professional and well trained developers and some home grown self taught developers. How many of these modules have been vetted by security experts is an important question to ask. What IBM Domino brings to the table is 30 years of security design and approaches. This is why it is important that IBM with HCL has carefully chosen the right modules to use.  Yes, they were behind on the TLS implementations, but the basic Domino architecture has capabilities still to this day have never been surpassed by others. DominoDB (as some now call it) with Node now brings Domino to a level where you ca
Post a Comment
Read more
More posts