On Thursday, August 27, 2009, we revealed the MWLUG Green Project fixture, "Wings of Collaboration" at the MWLUG Conference 2009. It survived being disassembled, moved, and reassembled in addition to being dropped a few times during the move. We were able to save a bit over 1200 pounds of carbon emissions using collaboration tools to share information including Lotus Notes, Lotus Quickr, and Lotus Sametime. In addition, we used Goggle Docs, Skype, and Mebeam.

The fixture is made from recycled corrugated cardboard that uses corn starch glue, recyclable copper tubing, recycled wood pulp and renewable pine wood, and other materials. The fixture includes 21 different wooden balls that represented the different user groups involved, the different sponsors who were graceous enough to fund this conference and Lotus. The copper tubing interconnected the balls to represent the Lotus community. Each ball is painted with the logos of each organization using non-toxic paint. After the conference, each organization will receive their wooden ball. 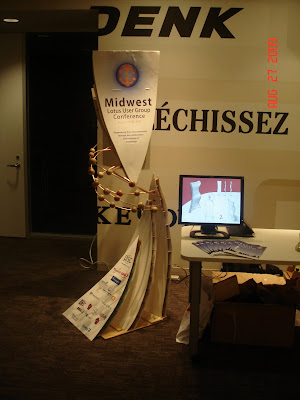 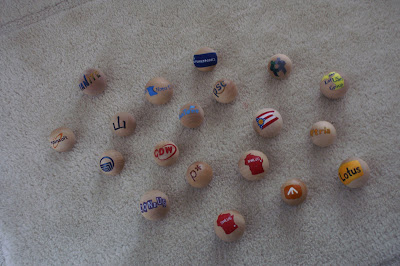 We are planning MWLUG Conference 2010 and will be create new challenges a new team of students. We are looking at making the 2010 fixture a contest between different teams from different schools. More information will be coming as we develop our plans.
Posted by Domino Interface at 8:15 AM No comments:

Recovering from MWLUG 2009 and Summary

It has been a great two days at the MWLUG conference. I could not believe how tired I was after the conference. I actually lost weight. For me this has been a great experience. It took much more of my time than I expected. However, this was a team effort involving IBM staff, other Business Partners, Sponsors, and IBM customers to make it happen.

The volunteers and the staff at the IBM Center in Chicago including Donna Hunter, Alan White, and Joanna Bick were great. Thanks to all the speakers who presented at the conference some of who which came from great distance under bad weather conditions. Thanks to Ed Brill for flying all the way from Australia overnight to present the keynote. I hope he enjoys his Buddha and add it to his collection. Attendance was very good. Almost everyone came. Unfortunately, there was a few that had to leave just when they got to the conference because of emergencies. There were a few who could not make it at all because of issues. It seems like there were many server upgrading going on.

Everything went much smoother than I was expecting. The MWLUG fixture, the "Wings of Collaboration" survived the move. The box was accidentally dropped a few times, but it made it.

Most of the keynote presentation will be available on YouTube soon thanks to Keith Brooks. The first part of unfortunately got cut off.

We were worried about the heavy rains that we were having on Thursday, the day of the architecture boat ride. However, for a period of 4 hours the fog and rain stop and we were fortunate to have a great double-decker bus ride and boat ride. I forgot how low the bridges are. Don't raise your hands when riding on the top of the double-decker bus. If not, you will not have any. It was a bit cool but we took what we could. A bit less than half of the attendees came with us. Most were concerned about the rain and did not come.

Right after the boat ride a few more people joined us at the Hyatt Regency for drinks and food. We also had a couple of party crashers which we kicked out. Everyone was there to about 8:30 PM. They closed the bar and eventually forced us out. Many continued their drinking at the Hyatt bar some way past midnight. Some took the time to visit other events that were going on downtown.

I will be posting pictures and videos of the conference on the MWLUG site sometime this week. If you have pictures or video that you would like to contribute, please send them to me. We will have available many of the presentations on the MWLUG site over the next couple of weeks as we collect them.

About 20 of us got together last night at the Crown Plaza Hotel for drinks. Everyone had a great time. I met some old faces and some new faces. We met Scott Good and his wife who had other plans that night. Alex Kassabov chose the restaurant at the Greektown area which is next to the Crown Plaza. Pretty go food. I went back with the group that left earlier. I needed some rest for today.
Posted by Domino Interface at 4:22 AM No comments:

We have now closed registration for the Midwest Lotus User Group Conference. See everyone tomorrow.
Posted by Domino Interface at 12:04 PM No comments:

Everything is ready for the MWLUG Conference 2009. It took some effort from many volunteers to put this together. We have a number of social events including the boat tour. I just hope the rain stops and we get some clear skies during the boat ride. It is going to be unusually cool for this time of the year. It is normally 85 to 95 degrees. But it looks like it is going to be 70. Since we will be on Lake Michigan everyone should bring a light jacket and umbrella. We are getting very close to capacity and people are still registering.
Posted by Domino Interface at 10:13 AM No comments:

I am please to announce that we have added a new event to the Midwest Lotus User Group Conference 2009. After cruising the Chicago River and Lake Michigan on the architecture boat tour, attendees are invited to join us for the MWLUG Conference 2009 Social Networking Event. It will be held at the Chicago Hyatt Regency from 6:15 PM to 8:15 PM. You will be providing more information on Thursday morning at the conference to all the attendees.
Posted by Domino Interface at 10:53 PM No comments:

The design fixture for the MWLUG Conference is almost complete. The team had to redesign the fixture because the design could not hold the weight of the structure. I had to put on my old engineering hat and help the team redesign the frame of the fixture. However, in doing so we had an accident that was almost disastrous. The redesign required replacing certain parts of the fixture with bigger components. During the replacement process we had to solder on new components. Even thought we were extremely careful and covered the entire area with aluminum foil, a slip of the propane torch by yours truly set the fixture on fire. Luckily the material does not burn that easily and we were able to put out the fire. If not, all we had to show at the conference was a few sticks and tubing.
Posted by Domino Interface at 4:02 PM No comments:

I started a series of blogs covering my North Shore bike tour many weeks ago. I have not gotten back to it because I burned out the bearings and cone on my front wheel and have not had a chance to revisit the locations so that I wanted to take more pictures of. I will get back on this after the MWLUG Conference. I am waiting for a new parts so I can fix my bike. This is the second time something has broken on my bike this year. I am about 65% to my goal of 1000 miles for the summer. I got a lot of more pedaling to do before the summer is over. Of course all the rain we are having in Chicago does not help.
Posted by Domino Interface at 3:54 PM No comments:

Everything is coming together for the MWLUG conference 2009. The efforts of many individuals from the different user groups have made this possible. We have a number of activities planned for this conference in addition to the boat tour. If you are coming to the MWLUG Conference 2009 next week and are planning to bring your family or friend with you to Chicago, we have guest tickets for the boat tour available. Please email me and let me know how many tickets you need so that we can have created them ahead of time. Your guests will need to meet us at the boat dock before 4:00 PM. We will have instructions and maps at the registration desk. The boat tour starts at 4:30 PM and will last to 6:00 PM. The discounted tickets are $15.00/person and will be available for purchase at the MWLUG registration desk. Please bring a check or exact cash.
Posted by Domino Interface at 3:42 PM No comments:

Back from VMware User Group Conference

I spent the end of last week at the Midwest Demo Day VMware User Group Conference in Indianapolis. It was refreshing to learning more about VMware and vendors products. I am impressed so far with what VMware does. We just completed switching one customer to our new VMware infrastructure.If you are using VMware, you should look at Veeam. They provide a series of administration tools at no cost. With ESXi and tools from Veeam you can be virtualizing and managing your server environment at no cost for the tools.
Posted by Domino Interface at 10:45 AM No comments:

Registration for the MWLUG Notes/Domino 8.5 Upgrade Workshop is now closed. We have filled up the workshop and then some.
Posted by Domino Interface at 10:31 AM No comments: