Showing posts from April, 2011
Show all

HP Throw it Weight on WebOS and drops Windows

April 27, 2011
HP is now focused on the WebOS that they purchased from Palm for their phones and tablets. Maybe it is time for Lotus Traveler on WebOS http://informationweek.com/news/windows/microsoft_news/229402283
1 comment
Read more

The MWLUG 2011 Steering Committee is please to announce that the Midwest Lotus User Group Conference 2011 will be held from August 24-26, 2011 at the Sheraton Milwaukee Brookfield Hotel . It has been a struggle this year to get a hotel in the Milwaukee area since most hotels that we were trying to get was already taken by other conferences. We have planned a number of events and activities along with over 35 technical sessions. Registration for MWLUG 2011 will start sometime next week. We will keep everyone informed.
Post a Comment
Read more

April 26, 2011
The ReCor team here in the Chicago area and in Germany have been working hard over the past few months to redesign our Java-based Enrave engine to include interactive audio with our Domino-based LearningDocs training technology. I am glad to announce that the ReCor Lotus Notes training is now available in both English and German with interactive audio. This brings the ReCor Lotus Notes training to the next level. The audio is a great addition to the already packed LearningDocs solution that includes interactive simulation, built-in learning management system, quick reference cards, customizable content, and integration with the Notes client.
Post a Comment
Read more

April 25, 2011
It is back for the third year and better than ever. Starting tomorrow, we will be making announcements about MWLUG 2011.
Post a Comment
Read more

Why choose Domino as your Web Application Server?

April 19, 2011
This is a blog that I have been wanting to write for a long time and it is very important to me as an developer and Evangelist of Lotus products. Many companies that I know have moved off Notes and Domino. Also I have heard many have come on board also. How the numbers stack up only IBM knows. But that does not matter if I am doing well in providing consulting services and training. The thing that I have been struggling with and have not heard from IBM is a compelling story on why a company would what to use Domino as their Web application server versus Microsoft and Google solutions and more importantly open source solutions. First, if your company is a Lotus shop that makes sense. However, majority of the world is not when it comes to Web application servers. If Domino is going to turn the corner and grow as a Web application server which is the direction that IBM is pushing, we need to easily provide this compelling story. I see open source-based frameworks like Drupal an
2 comments
Read more

What IBM really thinks about the cloud

April 12th, Anniversary of Two of the Most Important Dates in American History

April 12, 2011
Today marks one of the most important anniversary for us as a nation. 150 years ago, the first shot on Fort Sumter was fired and the American Civil War officially began. That shot from a cannon commanded Brig. Gen. Beauregard's division began at 4:30 am and went on for 34 hours. Fort Sumter was commanded by Major General Robert Anderson, whom was the former commanding officer of Brig. Gen. Beauregard, his opponent. No one was killed during the actual battle. However, that bloodless event started the most bloody war ever fought by United States with more Americans killed than all the other wars fought by the United States combined. Thought it was a horrible war, it define who we are as a "Nation". If you have not seen Ken Burns Civil War series, you should. PBS has been playing it for the past week. Today also marks another important anniversary for us as a nation. On this day, 50 years ago old, Soviet Union launched the first man in space, Yuri Gagarin. This defi
Post a Comment
Read more

April 07, 2011
I have procured a vintage ceramic Moy-Bier stein from Germany to add to my Moy-Bier collection. I just hope that it survives the shipping process from Germany to Chicago.
Post a Comment
Read more 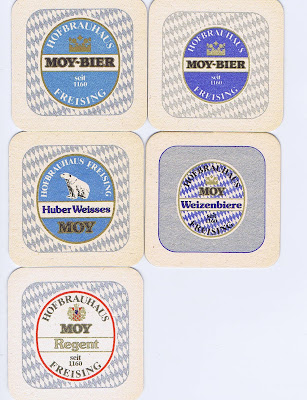 They are finally here. After a number of attempts on ebay, my Moy-Bier coasters have finally arrived. I can now add them to my collection of Moy-Bier paraphernalias. It is cool to have a beer and brewery name after you. Unfortunately, there is no relationship between the Moys from China versus the Moys from Germany or is there? Either way, you no longer can get Moy-Bier. It was discontinued as few years ago after over 900 years of brewing. It was available a few years ago at an Arlington Heights, IL liquor store but sadly no more. Never had a chance to taste it. However, I have been collecting Moy-Beir items including mugs, glasses, match sticks, and now coasters. My first two attempts to get the coasters end up lost in the mail. Finally this week, I received my coasters. Now for more Moy-Bier stuff including a large ceramics bier stein. My sure if they can survive the trip from Germany.
2 comments
Read more

April 04, 2011
We are fortunate enough to have Ed Brill speak at our April 11th GRANITE meeting coming up next Monday. If you are in the area and would like to have a chance to meet Ed Brill and talk more about the direction of Domino please join us at the April 11th meeting. In addition to Ed Brill, Mike McGarel from Czarnowski Exhibits will be presenting on UI design which has a direct impact on the success of social business software and Jose Blanco from Mercury Consulting who will talk about real examples of how Social Business is being used in corporation to help their organization grow. For more information about GRANITE and the April 11th Agenda, go to: GRANITE Web Site . You can now find GRANITE on facebook in addition to our Linkedin site. So if you are a Chicagoland area user, developer, administration, or IBM professional join us and build the GRANITE community.
Post a Comment
Read more

Rube Goldberg Device in the Forest